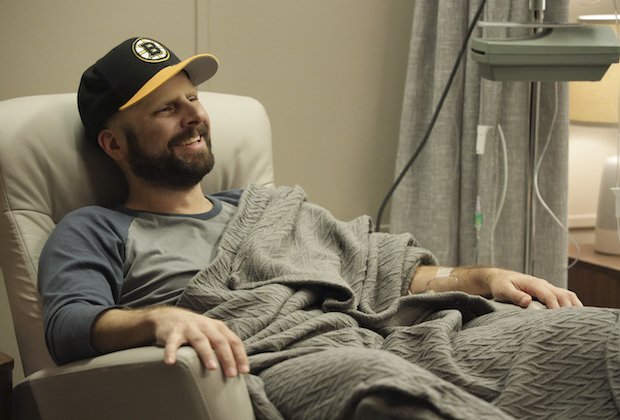 After the events of last week on A Million Little Things, Gary celebrates a year remission free. It leads to plenty of memories and flashbacks of his time with Jon during chemo sessions. Meanwhile, Rome opens up to his dad about his depression and Katherine struggles to deal with the life of a working mother without Eddie by her side.

Gary Deals with Memories of the Past

The episode opens with Gary thinking back to the time he told Eddie, Rome, and Jon about breast cancer. At first they don’t take him serious, and then they realize that he was telling the truth. In the present day, we learn that he’s been in remission for a year and he’s still conscious about it.

Gary decides to tell his friends that he slept with Ashley. They’re shocked and not impressed since Jon always said that Ashley was off limits. Gary is also angry that his friends are still supporting Maggie’s wish to die. He gets even angrier when both Eddie and Rome cancel on game night for other commitments.

It’s clear there’s something bigger. They’ve completely forgotten that he’s be in remission for a year and he clearly wanted to celebrate that. It also turns out that Jon was the one at every chemo session with him, picking his spirits up when he thought he wasn’t going to beat cancer.

With nobody else around, he decides to get Ashley to go out for a drink with him. She’s more than happy, as she’s clearly still trying to deal with Jon’s work to make sure the family are settled for money. While talking to Ashley about things Jon would say to him while going through remission, Gary starts to wonder whether Jon had been planning his suicide for the whole year.

Was Jon having an affair?

Ashley uses the chat at the bar to bring up the name Barbara Morgan. The talk of an affair brings up the name. She was one of only a few people Jon kicked Ashley off a call with, making it clear this was something to keep silent.

The two decide to move on and brighten the conversation up. When Gary goes to the restroom, Ashley gets a call from someone who checks on whether she’s with Gary. It’s clear what the phone call was all about. Everyone had planned to throw a surprise party to celebrate a year in remission.

During the party, Gary finally admits that he’s angry that Jon isn’t here. He’s angry that Jon fought so hard for Gary but couldn’t fight for himself. To be honest, it’s the outburst Gary needed to make and rather than talk about it, Eddie and Rome just hug him.

As for Maggie, like many of the subjects she and Delilah bring up, we’re deflecting the ending to the last episode at first. Instead, the two head on a road trip so Maggie can give a college speech about the complexity of grief.

On the way, they meet a guy at a gas station, who invites Delilah to his bar. It’s clear this is going somewhere else. More importantly, Delilah and Maggie talk about Delilah’s ring. She’s still got her wedding ring on and she tries to figure out why she still has it on. Taking it off feels like she’s cheating on Jon.

At the college, the speech doesn’t go well at first. Realizing nobody is listening, Maggie decides to open up about her brother’s death, the mixed feelings she had at the time.

On the drive back, Maggie and Delilah continue to bond and be honest with each other. Delilah admits that if she could, she’d go back two years ago. That was the time Jon shut her out. She has always wanted to understand that reason.

Rome Opens Up to His Dad

With Regina’s sink backed up, she decides to call for someone to fix it. That someone is Rome’s dad, who decides it’s time to show Rome how to fix a sink. It’s time for a few truths to come out.

Poor Rome. His dad is clearly old-school with the belief that jobs aren’t to make someone happy but just to bring home the bacon. He’s also surprised to find out that Rome is taking anti-depressants. It’s time for Rome to tell the full truth and he owns it all.

With the sink fixed, Rome’s dad leaves. Rome later admits to Regina that he wanted his dad to be proud of him and it hurts that he isn’t.

Eddie Gets an Offer He Can’t Refuse

When the Lumineers’ opening act cancels (didn’t Nashville use this band for Alannah to open?), Eddie’s former band is offered the gig. They need a singer and want Eddie to rejoin them. Now they know he’s sober, they believe it’s a new start for him. The problem is Eddie isn’t sure since he has Theo now. It’s an offer Eddie can’t refuse, though, and he ends up calling to accept.

Meanwhile, Katherine has to deal with being separated and how to handle Theo. When her mom won’t babysit and insists on Katherine calling Eddie, she decides to ask Hunter to help out instead. Eddie definitely isn’t happy about it.

When Eddie calls her out on it, Katherine is clearly feeling guilty for working. All she wants is to be with him. Later, she admits to Hunter that now she has the chance to make partner but it means being pulled away from Theo more. Is this something she really wants?

When Katherine is offered the position of partner, she makes her non-negotiable request. She wants to be off the grid between 6pm and 8pm. It shouldn’t be a big ask, but it is for her job and her position. When the other partners can’t accept that position, Katherine is still smiling. She’s got her life back and she isn’t willing to not be there for her son.

The very end finally touches on the events of last week. Back in the hospital, it looks like we’re getting another flashback of Gary and Jon. Instead, we find out that Maggie had decided to go for treatment after all.

What did you feel through Gary’s outburst? Did Katherine make the right decision? Will Maggie tell Gary the truth about treatment?

"A Million Little Things" airs its fall finale next Wednesday at 10/9c on ABC.