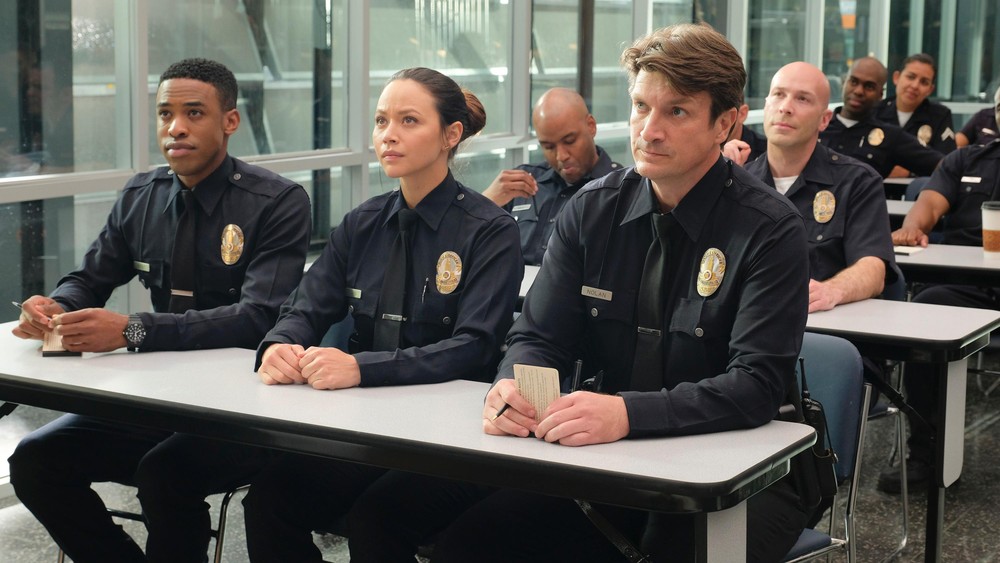 Nathan Fillion’s latest series has finally made it to the air. The Rookie series premiere introduces us to the characters we’ll get to know this fall, showing us there’s more to someone than meets the eye. Is it possible to be a success as a 40-year-old rookie?

It doesn’t take long to get into the reason Nathan Fillion’s John Nolan decides to join the police force. After his divorce, he struggles to figure out who he is and what he’s going to do with his life. That is until a bank robbery while he’s there and he realizes how helpless he feels during the situation. After that, he realizes that he wants to be a cop.

That leads us to his first day on the beat, where we meet his fellow rookies: Lucy Chen and Jackson West. After her car breaks down, Chen manages to make her arrest before even reporting for duty. West is the son of the commander of Internal Affairs. On paper, both are more cut out to be police officers, but are they better than John?

They’re assigned their training officers. Chen gets the hard-hitting, sometimes misogynist with a clear back story, Officer Bradford, West is placed with new training officer, Lopez, and John is assigned to Officer Bishop, who isn’t happy but she’s willing to give him a chance, unlike the sergeant clearly wants to do.

A Taste of the First Day

The three rookies head out on their first day and immediately run into cases. One of those, John is able to talk a man down who is screaming about unicorns and then figures out that the man’s son is in a car somewhere. Armed with very little information, he and Bishop are able to find the boy because of the clue about unicorns. There is a lesson involved for John, though, as he wastes time trying to get into the locked car with the wrong tool.

One of the other cases for John is a domestic call. John gets the feeling that the wife is the one beating the husband, but the husband won’t admit to that. Considering he’s a wrestler and the wife is small, that’s not surprising. This storyline doesn’t have a positive ending, as John witnesses the man die after the wife attacks him later in the series premiere.

We also get to see the three different training officers. While Bishop is there to teach and Lopez is happy she’s got the Legacy, Bradford is the hard-hitter. He trains through fear and intimidation. Who is right in their approach? That’s something we’ll have to see as The Rookie plays out.

During the episode, we do get to know why Bradford is so hard on his rookies. His wife shows up when he’s arresting a man, and he shares with Chen he hasn’t seen her in a while. She’s a drug addict and seeing her after so long, without even knowing where she was, hits him hard.

At the halfway mark, John struggles to deal with seeing the death of a man, feeling guilty that he could have possibly prevented that. Fortunately, his rookie friends are by his side to help him through that guilty. One of those more than the other.

For the last six month, John and Lucy Chen have been in a relationship. Chen isn’t ready to go public with it, knowing that it would damage her career as a female cop. It was the right move, too.

During the last (and big) call out, everyone is out looking for the same suspect. When Chen and Bradford turn up, it turns into a shootout and Bradford is shot. John rushes into the scene against Bishop’s orders, Chen tries to deal with the suspect and look out for Bradford (he survives), and Lopez deals with another suspect.

Lopez has also pulled over and starts shooting at one of the suspects. West panics and freezes by the police car, unable to help Lopez.

As the suspect runs off, injured from Lopez’s bullets, John, Chen, and Bishop race after him. The suspect takes a woman hostage, but John is able to shoot the suspect in the leg and arrest him. It’s in the end moments that Bishop realizes John and Chen are in a relationship and later makes it clear to Chen they need to call it off.

Because John disobeyed a direct order, he’s fired from his job by the sergeant. However, the police chief overrules the decision and forces the sergeant to reinstate John. Our 40-year-old rookie is back in business, but it may not be smooth sailing from this point.

What did you think of The Rookie series premiere? Is this the new Nathan Fillion show for you? Which character did you connect to the most?