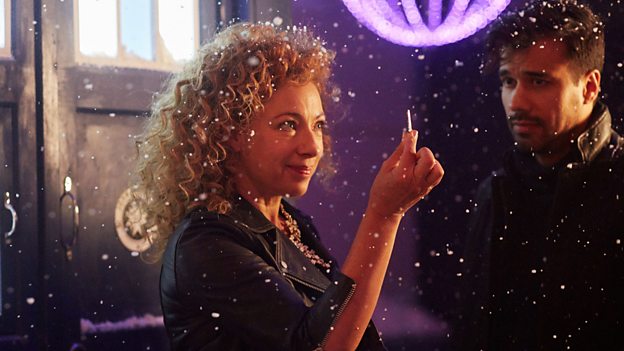 It’s Christmas Day on a remote human colony and the Doctor is hiding from Christmas Carols and Comedy Antlers.

But when a crashed spaceship calls upon the Doctor for help, he finds himself recruited into River Song’s squad and hurled into a fast and frantic chase across the galaxy. King Hydroflax is furious, his giant Robot bodyguard is out of control and coming for them all! Will Nardole survive? And when will River Song work out who the Doctor is?

Alex Kingston talks about the return of River Song and what it's like to step back into the TARDIS one more time for the 2015 Dr. Who Christmas Special.

I was quite surprised when I was asked to come back, but I was happy to because I just thought it would be great fun. It’s such a great character, she’s become so beloved by lots of fans and I’ve had them saying it would be so great for her to come back and to see her interacting with Peter Capaldi’s Doctor. I was actually thrilled when Steven decided he wanted to explore that too.

What did you think of the script?

It’s a wonderful slapstick caper. There’s a lot of great laughs, there’s a lot of fabulous River one-liners. The fans are going to love the things she says and there’s a lot of play. They’re also fighting a very interesting alien played by Greg Davies. It’s a really great episode and Steven has done my character proud.

Has this episode been challenging?

I’ve been really lucky in this episode as River gets to do an awful lot. She gets to run around in snow, I’ve been flying and have done harness work against a green screen. She’s got quite a few husbands in this episode and there’s a lot of fabulous quick-fire dialogue between her and the Doctor. She gets to snog the most handsome man in the work, his character name is Ramone. It’s all going on!

What were your favorite moments during filming?

The favorite moment so far for me was stepping back on to the TARDIS, because the interior of it has changed yet again. I’ve been on two different TARDIS incarnations, and to walk into this one and know it’s a familiar space but at the same time it’s different, was great. I love this one - everything works which is really fun, I stand there pressing all the buttons, it’s great!