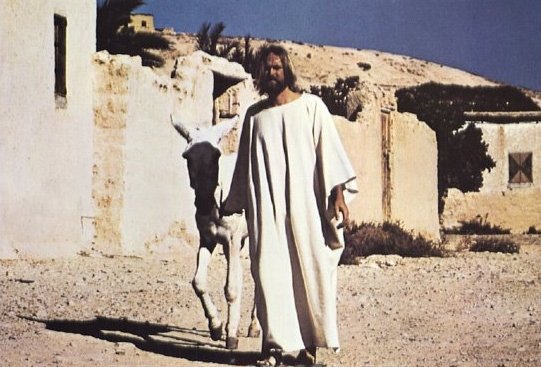 1973 was a big years for high-profile movies centered around the life of Jesus. Both "Jesus Christ Superstar" and "Godspell" were released by major studios. And famed country music singer Johnny Cash dug deep into his own pockets to self-finance the much lower-profile movie "The Gospel Road."

Cash had converted to Christianity in 1967 or 1968, but throughout his career he had recorded Gospel music. By 1972, he was just wrapping up a several year stint hosting an ABC television variety series and wanted to return to his Gospel roots for his next album. According to his biography, he decided the project should be a film and he co-wrote a script with Larry Murray. Cash paid for the entire project, which consisted primarily of shooting a lot of footage in various Biblical sites on Israel with a small group of actors. Cash's wife June Carter Cash played Mary Magdalene and the film's director also portrayed Jesus in the film. The latter casting choice was problematical, since Robert Elstrom was a tall Norwegian with long-blonde hair.

In fact, one of the biggest challenges when watching the film is that Jesus and his apostles are very light-skinned. So much so that it sometimes looks as the film is actually a recounting of the story of the Marshall Tucker Band.

In 1973, Cash was interviewed by Country Music Magazine and talked a bit about the production of the film:

When we went to Israel we had two songs that we thought would probably be in the film...We hired an Israeli film crew to supplement our crew that we took over there, and we decided since we'd gone to all the expense to take a bunch of people to Israel that we were gonna shoot the moon, and we were gonna make as good a film and spend whatever it took for the month that we had to spend over there. And that's what we did. We hired extras. We didn't try to make a little big movie. We didn't try to make a Cecil B. DeMille film. We used as few extras as we could, and at the times when there should have been a multitude of people, we didn't use anybody. We used sound effects, to try to make it seem like there was a multitude of people. Well, when we came back and started editing the film and putting it together, we saw the need of a song to help tell the story here and there.

"The Gospel Road" is earnest and it has a quirky production style that makes it worth watching for Johnny Cash fans. And the music itself is quite good, with the soundtrack from the film getting as high as #12 on the Country Album charts in 1973. But overall, the film is one that is probably best enjoyed in very small doses.