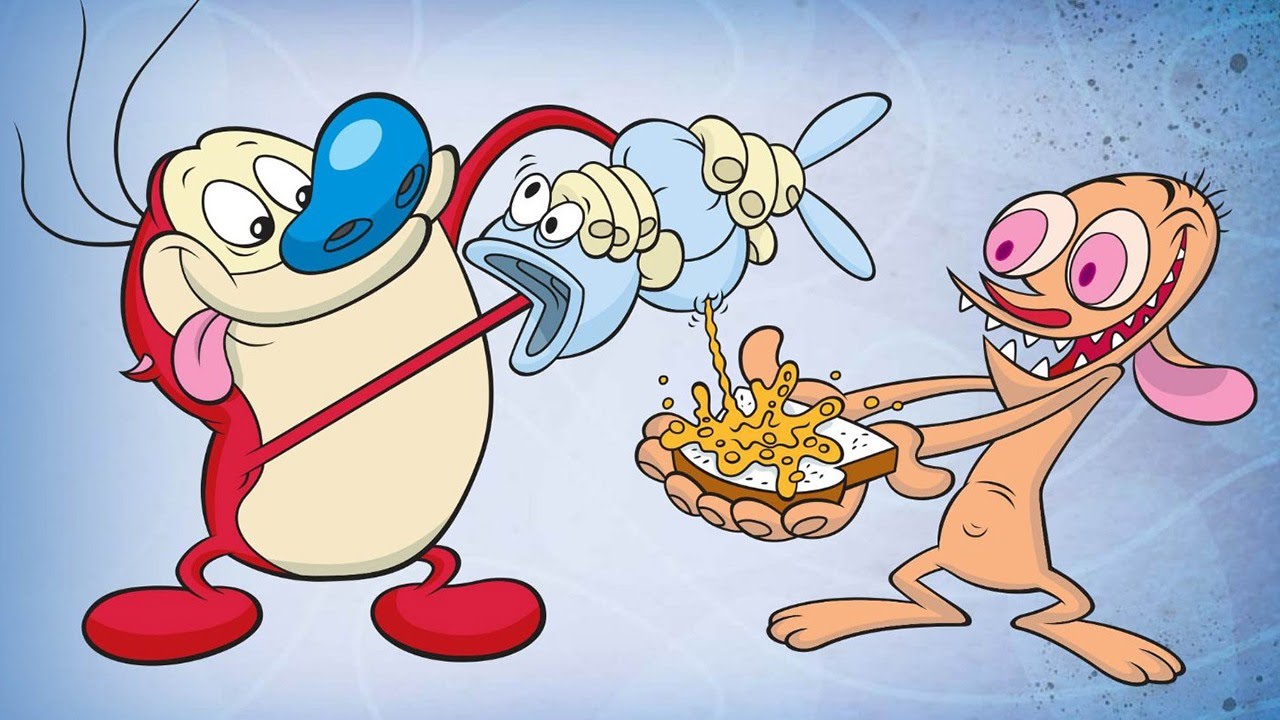 Here's everything you need to know about the world of television for Thursday, August 6th, 2020. I'm writing this from the Twin Cities suburbs, where AllYourScreens HQ is powered by coffee and pineapple.

I'M NOT SAYING THIS REBOOT WON'T WORK, BUT....
Viacom has been rolling out a number of reboots of their 1990s IP, and yesterday came news that a reboot of the animated series "Ren & Stimpy" is headed to Comedy Central. Now I have learned to never say a reboot won't work, because in most cases there is some scenario in which the right person can navigate a successful reboot of even the most unlikely project.

That being said, I have a hard time seeing the path that ends up with a "Ren & Stimpy" reboot arriving that is both funny and relevant to a 2020 television audience. Of all the classic Nick animated shows from the 1990s, R&S has a feel that is very specific to the its original airdate. Compared to sister shows such as "Doug" and "Rugrats," R&S was chaotic and a bit naughty. It almost felt as if the show has been snuck onto Nickelodeon without anyone noticing and all of that gave watching the show a certain cachet with viewers that it can't have in 2020.

But even more to the point, the very structure and backstory of "Ren & Stimpy" makes it a difficult series to bring back in modern form. The show was created by John Kricfalusi, a now-disgraced animator who won't be involved in this reboot. In early 2018, Kricfalusi was accused by two women of sexually harassing them while they were underage. He later released an apology for his behavior, blaming his mental health and "poor impulse control." But Kricfalusi's presence will hang over any new version of the series and that will ultimately make it a difficult sell to an aging millennial audience who would otherwise have fond nostalgic memories of this series from their formative years.

Perhaps the biggest issue with any "Ren & Stimpy" reboot is that it's not clear how you would reboot the characters. At its best, the series had no real storylines or anything resembling a coherent worldview. It was a scrambled, frantic and chaotic creative mess, an spectacularly idiosyncratic vision filtered through the sensibilities of a man who apparently had plenty of personal demons.

It feels as if this reboot was ordered more because it was a title that was once seen as successful rather than one that deserved (or even needed) a new audience. Ren & Stimpy aren't beloved in the way other older Nick animated characters are remembered. And none of the executives involved with this decision seem to have asked the primary question you should always ask when considering a reboot: "What did the original audience love about this show?" The reboot of "Battlestar Galactica" worked because the answer was that people loved the idea of a robot uprising. Everything else was superfluous & that's why a reboot that is so removed creatively from the original vision ended up working out so well. The HBO Max reboot of "Looney Tunes" works because executives realized that audiences love everything about the original vision: the old-school animation style, the classic feel of the characters. It works because they tapped into the elements fans love about those characters.

And that's the question producers will have to answer if a reboot of "Ren & Stimpy" has any hope of success: "What did the original audience love about this show?" If producers can't figure that out and deliver on the idea, this new take on a familiar animated series won't work creatively or financially.

THE CHART OF THE DAY
From Evolution Media Capital:

ODDS & SODS
Discovery is running a special "Shark Week" promotion on the gaming service Fortnight. At 2:00 pm ET on August 10th, Fortnite users will be able to see a special advance screening of the special "Tiger Shark King" in the theater of Party Royale. It's not an ideal way to watch a TV show, but it's definitely an effective way to reach an audience that likely doesn't watch a lot of linear television.

1) An American Pickle (HBO Max)
The film stars Seth Rogen as "Herschel Greenbaum," a struggling laborer who immigrates to America in 1920 with dreams of building a better life for his beloved family. One day, while working at his factory job, he falls into a vat of pickles and is brined for 100 years. The brine preserves him perfectly and when he emerges in present day Brooklyn, he finds that he hasn’t aged a day. But when he seeks out his family, he is troubled to learn that his only surviving relative is his great grandson, "Ben Greenbaum" (also played by Rogen), a mild-mannered computer coder whom Herschel can't even begin to understand.

2) Christina On The Coast Season Premiere (HGTV)
"The series spotlights Christina’s personal and professional journey as she juggles a busy family life, a demanding design business, authoring books and expanding her brand—all while working to maintain her own physical well-being."

3) Hitmen Series Premiere (Peacock)
Best friends Jamie (Mel Giedroyc) and Fran (Sue Perkins) are trying to make their way in the world with only each other to rely on. They also just happen to kill people for a living. Fueled by their antics and frivolous bickering, each job inevitably gets derailed, leading them into bizarre misadventures, full of oddball characters and unexpected dilemmas.

4) On The Trail: Inside The 2020 Primaries (HBO Max)
The cinema verité feature reveals the lives and personal grit of veteran journalists and intrepid first-timers, Dana Bash, Kaitlan Collins, Jessica Dean, Daniella Diaz, Annie Grayer, Kyung Lah, MJ Lee, Abby Phillip, Arlette Saenz, and Jasmine Wright, against the backdrop of the volatile 2020 race.  Beginning just days prior to the Iowa caucuses, viewers see the journalists pack up and leave their families to fan out across the country, to report on the president and his would-be rivals, as the candidates launch (and end) campaigns, and contend for voters.  The film is punctuated with intimate interviews with these journalists, detailing the lives they put on pause back home.  They bring their training and life perspectives to the job, while demonstrating what it takes to be a top political reporter in the arena.

5) Star Trek: Lower Decks Series Premiere (CBS All-Access)
This new animated series focuses on the support crew serving on one of Starfleet’s least important ships, the U.S.S. Cerritos, in 2380. Ensigns Mariner, Boimler, Rutherford and Tendi have to keep up with their duties and their social lives, often while the ship is being rocked by a multitude of sci-fi anomalies.

6) The Rain Season Three Premiere (Netflix)
Years after the rain decimated the population of Scandinavia, Simone and Rasmus find themselves at odds about how to save humanity.

8) Upright Series Premiere (Sundance Now)
When family outcast Lucky Flynn learns that his mother is dying, he decides to drive to the other side of Australia to see her, packing nothing but an upright piano for the journey. His plans are soon turned upside down when he meets the runaway teenager Meg, who’s dealing with some family demons of her own. Together, they forge an unlikely friendship as they embark on a road trip adventure across the beautiful Nullarbor Plains in a race against time. Along the way, they encounter feral camels, a magical pink lake, highway thieves, cliff-top parties, a speed-loving truckie, an underworld fighting ring, suspicious cops and the world’s most musically appreciative motorcycle gang. Over eight hot days, Lucky and Meg drive, hitch and scam their way across the scorching desert continent – with the upright piano never leaving their side – on a journey that will ultimately make them both feel more at peace with everything in life that they’ve been kicking against.For a rundown of all the new episodes of television premiering tonight, click here.